Bulgari has come out with a fill line of skin care products and they sent me a number of sample sizes to try. I plan to cover most of them but am starting with the two eye crams because I grabbed them first to try. Why? Because I am a sucker for a good eye cream!  So those jumped out at me as what I wanted to test first. 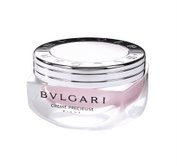 The Bulgari skin care line contains Bulgari Gem Essence which is described by the company as follows:

Bulgari’s exclusive Bvlgari Gem Essence® formula contains four extracts of fine and precious stones chosen for their synergetic and beneficial effects on the skin. These include: sapphire, malachite, tourmaline, and citrine.  In addition, the line includes a specific polypeptide III complex. Furthermore, the combination of the two should stimulate the production of collagen, elastin, hyaluronic acid, and fibronectin all of which can affect the skins tone, coloration, and elasticity etc.

Regard De Lumiere is a day cream that absorbs quite quickly and feel very nice. There is no residual oiliness with it and it has a luxurious feel, which I would expect from a luxury line!

Regard Precieux is a bit heavier eye cream, suitable for dry skin or as a night cream. It too absorbed well and had a nice feel.

I didn’t have large enough samples to really state anything about the effects of these creams over a longer period of time, but both are nice in terms of feel and moisturizing ability. I particularly liked the light weight and quick absorption of the Lumiere cream. Being from Bulgari, they also have rather nice packaging.

the Bulgari skin care lines are available at Bergdorf Goodman and Neiman Marcus.