Carine Roitfeld, Editor in Chief of CR Fashion-Book, has a fall collaboration with MAC cosmetics. Included in the collection two palettes that consist of 4 eye shadows and a cream blend blush.  I received the Jungle Camoflage version, so here is a quick review, with a set of swatches and video.

The shadow shades in this set are matte, which I rather like. However, the cream blush is not useful for me as it is a rather dark shade for my skin tone. There is no choice involved in your blush shades with these, and the blush in each one is brown tone, so be warned that it might not work for you.

Here are swatches of the Carine Roitfeld Jungle Camouflage palette: 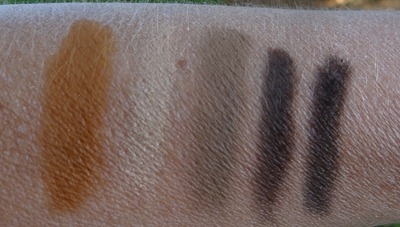 The MAC and Carine Roitfeld collection is limited edition and will be available until early October.

Disclosure: This post is based on products given to me by a representative of MAC cosmetics.