The MAC Heavenly Creature Collection features a number of mineralize products, along with skin care. If you have never used MAC Volcanic Ash Exfoliator before, or if you need a refill, grab it now! It is jet black and a bit messy, but boy does it rock as an exfoliator! I use it in the shower to take care of any mess.

The mineralize products I received are pretty nice, and I decided to do a video of them as well as swatching them for the blog. The video shows a bit about each product and then close ups of the swatches both inside and outside in sunlight.

Below are swatches of MAC Heavenly Creature Mineralize Skinfinish in Lightyear, Mineralize blush in Supernova, and Bright Moon and Earthly shadows. I like the Bright Moon shadow quite a bit. 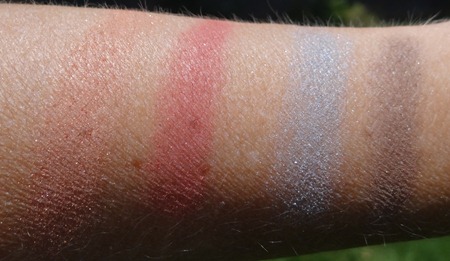 Here are swatches of the Heavenly Creature Venus and FireSign lipsticks. These both are nice utility shades that would work for many people. They also have matching cremesheen glass shades.

Here is a lip swatch of the Fire Sign lipstick with Galaxy Rose cremesheen glass. I love this combination!

Finally, here is my video of the MAC Heavenly Creature Collection filmed while I made swatches. There are closeups of the swatches at the end of the video.

This collection is on counter now!

Disclosure: This review is based on products provided to me by MAC Cosmetics.

Blush Collections Eyeshadow Lipgloss Lipstick M.A.C. Swatches Video
by Carleenp
Leave a Comment
previous article: Makeup Wars: The $20 Makeup Challenge
next article: How to Pick the Right Colours for You