I was sent a Napoleon Perdis NP Set palette. These palettes are sold at Target. I received the collection Sweater Set. It contains five shadows, three lip colors, and a blush. 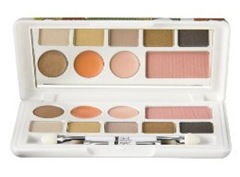 I found that the lip colors were quite soft and sheer. They really are more akin to a well tinted gloss. They wear well and are not sticky. The shadow shades are quite pretty, but also a bit on the sheer side. They are great for a light daytime look, but if you like really high pigment, these might not measure up for you. They did last well for me and I liked the light metallics, which were not too glittery, but had enough shimmer to make me happy. The darkest shade was well pigmented enough to use as a liner. The blush was nice, but the palette does not include a brush for that.

Below are eye shadow swatches from the palette, I put these on rather thick for the picture: 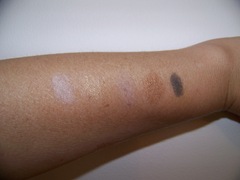 And lip and blush swatches: 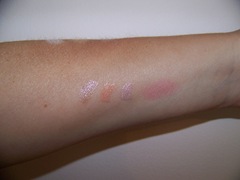 The Napoleon Perdis NP Set Palettes can be purchased at Target stores for $29.