October is about pink. The month when companies put out cool pink stuff and donate a portion of the proceeds to breast cancer research. It isn’t without controversy. Some companies donate little of the proceeds and it is sometimes unclear where the proceeds go. In other cases, cosmetics from the companies contain ingredients that may be linked to cancer.

As a result, I have seen suggestions that instead of buying pink ribbon products, your money would be better spent on direct donations. I don’t disagree with that. With that said, October often brings some neat limited edition products that will be of interest and that many will want to buy. So I certainly plan to feature some items in October, with greater attention to those that donate a larger potion of the proceeds. But I would be remiss if I did not point out the criticisms. For more on that, see Think Before You Pink and this week’s Time Magazine article: Pink Ribbon Promises .

So, on to some products. The following items donate 100% of the purchase price to cancer charities:

At Target, the Sonia Kashuk Pink Case Brush Set  sends 100% of the proceeds to breast cancer research. I have previously discussed Sonia Kashuk brushes. The pink case sure is cute! 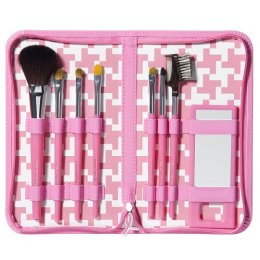 . Philosophy makes some really nice bath products, and this one is no different. 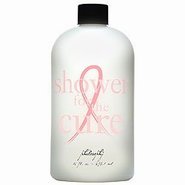 For a look at some pink ribbon lip products head on over to Girl Gloss!
Advertisements and Sponsors
Shop Our Favorite Stores!
Sephora
ShopBop
Nordstrom
Beauty.com
Amazon.com