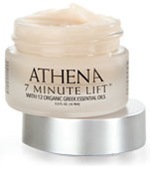 (aka Face Lift in a Jar), but the stuff actually does have a noticeable short term effect on fine lines and wrinkles.

The Athena 7 Minute Lift is essentially a strong firming cream. It works by tightening the skin, which in turn makes lines and wrinkles smoother and less noticeable. The claim is that over time, this can also lessen the wrinkles because the skin is not as mobile–sort of like Botox on a much lower level. I can’t speak for that claim since I haven’t used the product long enough, but as a day to day and short term fix, I rather like it!

The 7 Minute Lift comes with a brush that is moistened to apply the product. Then, small amounts are brushed or dabbed on wrinkled areas, either before or after applying makeup. Very little is needed, so while a jar of the 7 Minute Lift is a bit expensive, it should last for quite some time. There is one difficulty with application though–you have to keep your face motionless for 7 minutes after applying the cream. During that time, it goes to work and tightens the skin. That is easier said than done! But I was generally able to keep my face still long enough for things to take effect (try doing something something boring like vacuuming during that time).

The tightening feeling is noticeable, and I felt that it lessened the appearance of lines, especially around my eyes and on my forehead. No, it isn’t a miracle, the wrinkles did not disappear, but they did look lessened. I found the effect to last a a few hours (around three) and then I needed to reapply. That wasn’t too difficult since the product can be used over makeup. The product was slightly drying, but not overly so and the instructions state that if you become dry and flaky, you are using too much.

Overall, Athena’s 7 minute Lift was an interesting item to try and I will definitely keep using it. If you purchase it, be sure to watch the included DVD because following the instructions is important with this one! The Athena website also has a pretty good FAQ.