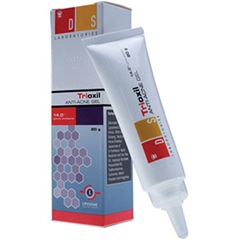 When I first read about DS Labs Trioxil (bisazulene gel) I was rather curious. I came across it on several message boards and it seemed that about half of the people who tried it loved and half hated it. After more reading, it became clear that many reported an increase in acne when they first began using the product, followed by significant clearing. So there was a trend where those who stuck with it, liked it, while those who quit during the first week or two hated it.

I decided to purchase some and try it. Using an antibacterial and anti-inflammatory compound from chamomile that is encapsulated in nanosomes for time release of the active ingredient, Trioxil is advertised as being as effective as Salicylic Acid and Benzoyl Peroxide, without the drying and irritation that those can cause.

I have been using Trioxil for about 6 weeks, but alternating it with another product, so it tends to get used every other day. Consistent with the reports that I read, I experienced an increase in acne the first few weeks that I used it. My theory is that it probably exfoliates to a certain degree, which will bring some of the underlying acne to the surface. Regardless, after a couple of weeks, I cleared up significantly, and while my acne isn’t gone, it is definitely improved 6 weeks later. Unfortunately to get full clearing, I think an appointment with a dermatologist for a prescription is in the cards for me.

Trioxil tingles a bit when used, so those with sensitive skin should be prepared for that. But it does not tingle any more than many salicylic acid products that I have used, and it is not drying or overly irritating. It has a bit of a yellow/tan color to it and a slightly odd scent. Neither is overly problematic, and I don’t notice the scent after it has been on and absorbed, but I would prefer it to be scent free.

I am inclined to repurchase DS Labs Trioxil once my tube is gone, although I might go to using only the Dermaquest Dermaclear

formula (read review) that I have using in conjunction with it. I haven’t quite decided yet. At $34 for a tube, Trioxil is cheaper than the Dermaquest product, albeit for a smaller amount of product. But I like Dermaquest Dermaclear quite a bit as well.

2011 Update: Trioxil appears to have been discontinued, see the Dermaquest Review link above for a good alternate product