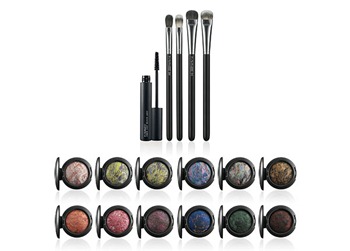 The MAC Semi-Precious collection offers twelve very well pigmented mineralize eye shadows,  three blushes, and four Mineralize Skinfinish luminizers/blushes/bronzers. In the past when MAC has done mineralized eye shadow I found that some of the shades ended up a bit muddy at times, but this collection  generally didn’t have that problem among the eight shades that I swatched, with the exception of one dark green shade, Dark Indulgence (which I think still looks OK, but the green doesn’t show at all) .

Below are Semi-Precious Eye Shadow swatches of eight of the twelve shades. From left to right with notes in parenthesis: Unsurpasssable (this is more luminous than the picture shows and is a gorgeous light turquoise/teal), Quartz Fusion (lots of glitter in this one that doesn’t show as well in photos), Dark Indulgence, Blue Sheen (particularly well pigmented), Rare Find (my personal favorite), Faux Gold (more luminous than the photo really depicts), Jade’s fortune (another really pretty and interesting sea green shade), and Mineral Mode (this was more pinkish than I thought it would be).

Neither of the blush shades that I tried thrilled me, but that is only because they wouldn’t personally work well for me, they actually are rather pretty shades. I also noted that they have pretty decent pigment to them. I also tried three of the skinfinish shades. Here are  swatches of the blushes and skinfinish. From left to right: Pearl SkinFinish (probably the best shade for my rather pale skin), Rose Quartz SkinFinish (has a very pretty pink to it), Goldstone SkinFinish, Pressed Amber blush, and Warmth of Coral Blush 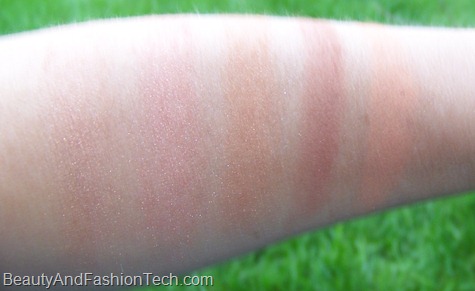 This  collection is available July 7, though August 21, 2011. Sometimes the collections show up for sale a few days early.

Disclosure: This review is based on products provided by a representative of the company. For more, please see our disclosure page.