You are here: Home / Self Tanners / L’Oreal Sublime Bronze Self Tanner Review 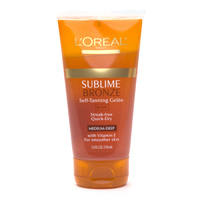 Awhile back I posted about my displeasure with Aveeno Continuous Radience Self Tanner and my preference for Neutrogena Build a Tan. I mentioned there that I was going to try a L’Oreal self tanner and I have since tried both a spray and gel from L’Oreal and I really liked both of them. I also tried their corrector for mistakes, which I thought was OK.

L’Oreal Sublime Bronze Self-Tanning Gelee is a gel based self tanning lotion. L’Oreal Sublime Bronze Self-Tanning Lotion is a very similar product, which although labled as a lotion, I found to be more gel like in consistency. Both products come in tinted and untinted varieties, and I tried the tinted versions in medium. The tint was light and had a very natural tone to it. To my surprise, the lotion also had a sparkly shimmer in it, which of course was not so natural looking, but was quite subtle, and I happened to like it quite a bit. I also liked using a tinted product because it allowed me to see where I might be missing a spot and helped assure that I rubbed things in evenly. In addition, I thought the gelee in particular spread more evenly than a lotion normally does. The tints and shimmers washed off with my shower the next morning after use and I was left with a very nice light-medium fake tan. There were no problems with streaking and the overall color continued to look good for several days. I was very happy with these products and highly recommend either of them. 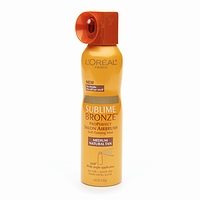 I was also quite pleased with L’Oreal Sublime Bronze Self-Tanning Mist. The mist, which works from any angle, goes on easily and is the best streak free self tan I have ever had. The first time I used it, I did mess up and put too much on my feet. I then compounded the problem by failing to wipe off the excess. That created a few minor streaks which were entirely my fault. The important part of that story though is that I am shocked that for how much I messed things up there, the streaks were extremely mild. With just about any other product they would have been horrid. So that itself says something for this product. On the rest of me, the tone was beautiful, even, and natural looking, with fairly long lasting results. When I used the product a second time, properly protecting my feet and only lightly applying there, everything was perfect.

I think that a spray really is the way to go for the most even fake tan and I really love the L’Oreal one. My one complaint about the L’Oreal spray though is that it is rather oily. Be careful about spraying it so that it hits vinyl or tile flooring. It makes the floor really, really slick! It also claims to dry in five minutes, but it is easy to spray a bit too thick, and even with a thin mist, it leaves behind a baby oil feeling on the skin for hours after. It wasn’t bad enough to make me worried about putting on clothes and such, nor did it or will it deter me from using the product repeatedly. But to the extent the label leads people to believe there will be absolutely no residue after five minutes, it is misleading.

After messing things up with my feet, I was glad that I also bought the L’Oreal Sublime Bronze Self Tanning Perfector and Corrector. The corrector comes packaged in individual use packets and is a scrub like lotion. I used it on the streaks I created on my feet with pretty good success. I got to those early though and they were pretty mild. As soon as I saw that things were getting dark there, I scrubbed and it generally worked. But when I tried this product on another occasion on a spot that had been allowed to develop for a day, it really didn’t do a whole lot. So I think this product is useful if you can get to the problem early. But if you wait, then I’m not sure that it is any better than using an everyday scrub on the area to help it wear off quicker.

Update: I used both the gelee and lotion, and finding them quite similar in use and effectiveness, meant to review just the shimmery one in order to conserve space. But I realized last night that I had accidentally attributed the shimmer to the Gelee, when it is the lotion that has the really noticeable shimmer. I have updated the review now to include both the Gelee and the Lotion. The corrector appears to have been discontinued.

Shop Black And White Dresses, Orange Dresses, Bralettes, One Pieces Swimwear and more. Get this widget.