OK, so I am not a nail polish blogger for a reason. I really am terrible at nail art! But, I figured I would give it a go for the Makeup Wars Halloween Manicure topic. What you see below isn’t pretty. I partly blame myself, but mostly I think the kit I bought is not very good. I also made a video and, to compound the debacle, the camera died partway through and I didn’t realize it until after I took all of the polish off!  Gah!!!! But I did add some fun annotations to the video to make up for it.

So read on for more on my epic manicure failure with a partial failed video!

For my manicure, I chose these Kiss Nail Artist kits at my local grocery store. These kits have three bottles of polish and some little stencils to use on your nails. Mistake number one that I stupidly did not consider: Buying a cheap kit probably isn’t going to result in good results, especially if you already are a klutz with a nail polish brush! 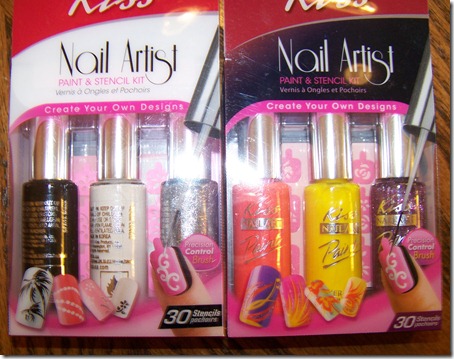 I quickly realized that I needed a base coat, so I randomly grabbed two MAC polishes. One was  MAC Coral Wave and the other MAC Black Enough? from random past collections.  Mistake number two was that I didn’t realize that Black Enough? was matte until after I put it on!

From there, I started applying stencils. They were a bit hard to handle, but not too terrible. The problem arose when I tried to paint them in. I think the idea is to paint carefully inside the stencil, let it dry and pull off the stencil. The kits lacked instructions on this. But the thin brush with the polishes just gooped up and dripped all over. If I wiped it and dipped it lightly, then it didn’t get enough polish. So on this I blame the product. Application was not ideal. 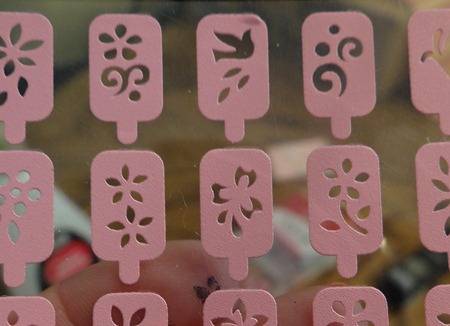 After letting things set, I peeled the stencils. My pinky, which was supposed to have a star, came out as a black blob. Perhaps I can pretend it is a smashed spider? Something that was supposed to look like a sword looked like black streaks. A few diamond patterns were so-so, but they smeared when I lifted the stencil. Yellow applied over black did not work at all because the yellow was not opaque enough, even with multiple coats.

But!!!! Despite being all thumbs, my thumb came out OK! So, here is my thumb because it actually looks OK (kinda sorta). 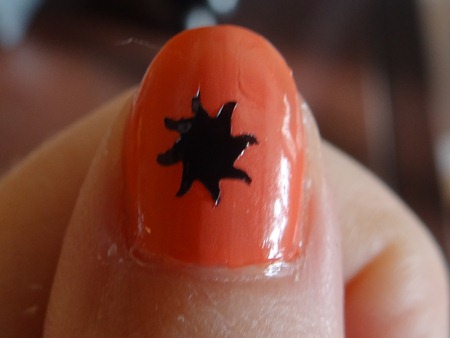 Here is a look at the shameful rest of the bunch. I declare these an epic failure! 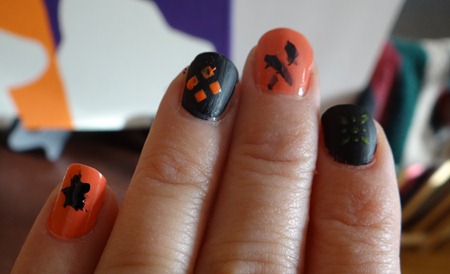 If you want to see video of the process, here is part of one with annotations. Mistake number three was not checking my battery before filming. It died part way through and I didn’t even realize it! So this video ends a bit on the early side.  Oh, and I really don’t recommend buying the Kiss nail artist sets. I realize I am not good at this stuff, but it still was not a good product in my opinion.

Want to see more Halloween manicures that are likely much better than mine? Click on through the links below!!!