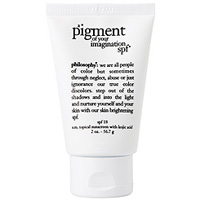 Everyone should be concerned about sun exposure. If you aren’t all that worried about things like skin cancer (you should be), then remember that the sun also causes wrinkles (ack!). If you happen to have melasma, hyperpigmentation, or similar discoloration, it becomes even more important.

Philosophy a pigment of your imagination spf 18

is a particularly good sunscreen for melasma sufferers because it contains treatment ingredients. It also can be good for those who suffer from acne because of a general lack of acne causing ingredients. Aside from the melasma treatment actives, I chose to try it partly because several of my favorite sunscreens have been causing breakouts for me lately.

The idea of adding skin lightening active to sunscreen intrigues me. I love the idea and am surprised that more companies haven’t done so. DHC has a sunscreen that I absolutely adore with arbutin (read review), and Philosophy’s sunscreen contains both arbutin and kojic acid. By adding actives that act to block pigmentation, the sunscreen does double duty, because the damaging rays are blocked and so are some of the skin reactions that lead to melasma. Hopefully more companies will pick up on this.

Philosophy a pigment of your imagination is a pretty good standard SPF 18 sunscreen. I found that it absorbs OK, albeit a bit slowly. After a few week’s use, I have not broken out from it and am generally quite happy with it. Using a pigment of your imagination in conjunction with my daily melasma treatment, I have continued to see lightening in some areas, and certainly have not experienced worsened pigmentation in any areas.

The sunscreen does have an odd yellow tint to it from the kojic acid, but that is not apparent on the skin. It also is not all that moisturizing, so if you use your sunscreen for light moisture, you might need to add something with this one. I find that on particularly dry days, I need to add a moisturizer. There also is a bit of a packaging issue with it. Because it is in a tube with a flat cap, it would be standard to store it sitting upright on the cap. But this causes the sunscreen to run into the cap area. Then when the tube is opened, there is always a good amount of sunscreen all over the top. I find it a bit annoying, although it won’t stop me from purchasing the product again.

I generally purchase Philosophy products online, but they are also available at various department stores and cosmetics stores.