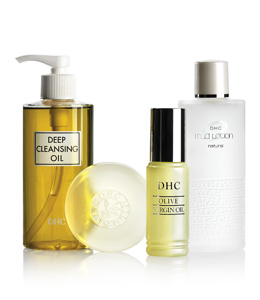 DHC skincare makes some great olive oil skin care products. Since DHC is based on olive oil (in fact one product is solely pure olive oil), a common first thought is: Won’t DHC skincare items cause break outs? But the general reports from both the DHC skincare company and from consumers is that the products, even the pure olive oil, do not clog pores. Instead, olive oil helps to dissolve the gunk that can sink into them, as can other oils. This has been my personal experience as well. Skin care products have been evolving more and more these past years.  That’s why skincare industries have been getting better and rosehip oil has become prevalent in the industry. Allowing you to feel better about yourself every time you apply it to your face

The use of olive oil for skin care can be traced to the ancient Greeks, who used it for its moisturizing properties. Extra virgin olive oil from the supermarket can be used on dry skin, put in the hair as a treatment, added to the bath, and more. When used as a cleanser, it dissolves makeup quite well, including waterproof mascara.

So it is not surprising that DHC, a popular Japanese company focusing on skin care, does well with its olive oil products. I found myself with eleven different products to try when I was given a bunch of samples. Now that I have used them, I am reviewing them in two parts. Today I will cover what DHC skincare calls “The Olive Essentials Set.” The next installment will look at some of their other items.

DHC skincare has a variety of cleaners, moisturizers, and other products. But they focus their advertising on a basic regime consisting of an olive oil cleanser, soap, toner, and pure olive oil.

The upshot is that I will be buying the DHC Deep Cleansing Oil, which I just adore, and passing on the rest. From reading other DHC skincare reviews I suspect that my thoughts about the other products are due to my own proclivities. Plenty of people like the other products.

For those wanting to test some of the products themselves, DHC provides a Catalog upon request that includes 4 samples. The literature I was provided states that those are the DHC Deep Cleansing Oil that I reviewed here and the Velvet Skin Coat, Q10 Creme, and Concentrated Eye Creme, all of which I will review in other installments. DHC skincare also allows customers to choose up to four samples with each order. Update: once on their mailing list, you will continue to get catalogs with different samples each time.