The Sephora Natural Instincts Palette has been getting good reviews on the Sephora website. But I have mixed feelings about it. On one hand, it offers 14 shades at a nice price ($28). However, there were various issues I had with it that I’ll detail after the initial photos.  The palette itself looks quite attractive in photos. Here is Sephora’s picture of it. 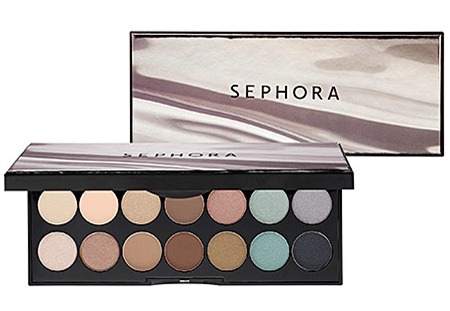 In reality, this is a rather thick palette, measuring half an inch to a three quarters of an inch thick, which struck me as odd. Here is my photo, although I never caught one showing how thick the thing is.

When I swatched the Natural Instincts shades, a couple of this jumped out at me. First, some of the shadows were softer than I would like, with a lot of fallout, yet others were on the hard side. So that was perplexing. Next, two of matte shades seemed lacking in pigment a bit, but the others and shimmers were quite well pigmented. So again,the inconsistency was odd. Finally, these are very cool toned shades, even among the items that would be viewed as neutral. Almost everything has a cool undertone, so those of you who like warm shades might want to skip this one. Finally, the blue shades had a gray cast to them that I don’t necessarily dislike, but don’t love either.

Here are swatches of the Sephora Natural Instincts Palette, top row. The second from the left is one of the shades that was both hard and under pigmented.

Here are the bottom row swatches. The first shimmer was softer than I would like and the third from the left was another matte that lacked pigment a bit.

Overall, I am OK with the Sephora Natural Instincts palette, especially at the price. But it is definitely more for cool or neutral toned skins and it isn’t perfect.  Still, it is a decent value, especially if the shades are of interest to you.

Buy it at Sephora