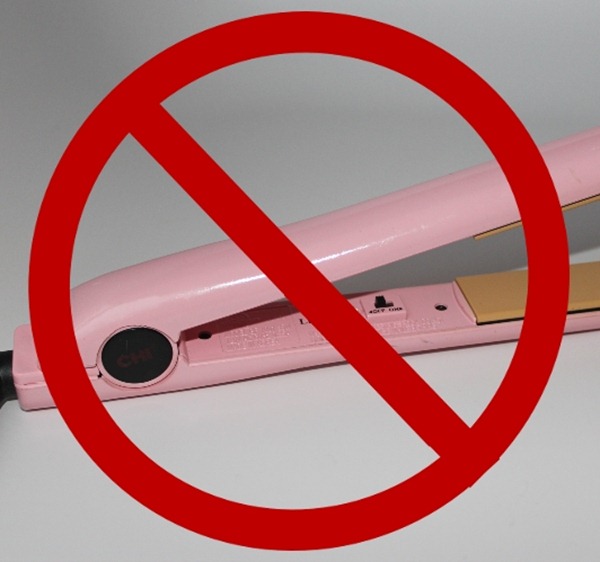 UPDATE: On August 21, the PR Manager at Farouk Systems/Chi called me and offered a very sincere apology. She said that a third party contractor is used to send out trademark notices in order to tackle web spam and that bloggers were never intended to be included in those efforts. I let her know that the email appeared to come from in house with their in house counsel’s name on it, and she will look into that. The company intends to address the matter to assure that bloggers are not targeted with these notices. She assured me that Chi loves bloggers (including noting that they pinned my original review) and they are extremely sorry that this happened. She offered to send me products or have me join them at Fashion Week, which is a nice gesture, but I am declining that. I do greatly appreciate the apology though. Even more, I appreciate the assurances that efforts will be taken to prevent other bloggers from receiving these types of notices. My hope is that whoever is in charge of that becomes informed enough about bloggers and marketing goals so that this does not happen to anyone else. My biggest concern with this all along has been that innocent bloggers might get such a notice and be rather intimidated by it. Again, I do appreciate what seems to be to be a very sincere apology from Farouk Systems and Chi.

A bit later the attorney for Farouk also sent me an explanation and apology. He assures me that they have gone back and checked to be sure that no other bloggers received notices in error. I am adding a screen cap of it to the documentation page, with  personal identification blacked out. I appreciate that efforts have been taken to correct this and that the company is responding to the matter.

Note: Chi is a registered trademark. Aside from receiving press pitches from their PR firm, I am in no way affiliated with Chi flat ions or endorsed or sponsored by them. My writing here is an editorial news comment on the company’s business practices. All opinions stated here are my own. I do not speak for others in any way, shape, or form. Why did I just state this seemingly obvious stuff? Read on….

Photo Credit: Many thanks to Dinah at D.G.S. Beauty for taking a photo of her Chi flat iron for me. I added the circle and slash.

A jaw dropping event occurred for me the other day. I was accused of trademark infringement by Farouk Systems, who is the parent company of Chi flat irons, along with other Chi hair products and Biosilk. Why? Because I published a positive review of an Ultra Chi Flat Iron and used the name of the product in the review and in the title. WTH You say? Well, so did I.

Before I get into details. I have to say this. What I state here are either true facts or personal opinion based on the facts. For example, I think the company is absurd in how they approached this (I’m putting that nicely since calling them names such as donkey dork poo heads, or the worse things that my husband called them, might not go over as well). That is my personal opinion and not a statement of fact. I am just getting that clear in case this company likes to threaten defamation suits too. Where I go overboard on reminding you that it is my opinion, it is a satirical embellishment to drive this point home (not to mention really my own opinion). Oh, and I am also an attorney, and while it is not my primary area of practice, I happen to know some things about trademark law. Being in this field and having spoken on legal topics for bloggers, including a bit on trademark law, I am rather interested in the topic. Now, onto the story!

It all began in January 2013, with a glowing review of the Ultra Chi flat iron. I either received a reader review of it or commissioned a honest user review of a favorite hair tool on a site I sometimes use for articles (I think the later, but I don’t recall which). The post began with the words “the following is a reader review of the Ultra Chi Flat Iron.” Nowhere did the post suggest any affiliation with Chi or any endorsement of my site by them. A link to buy the product at Ulta was given at the beginning and end. The writer loved the product and wrote glowing things about it. Really glowing things. They seriously loved their Chi flat iron. And that is great, since a large part of my purpose here is to share info on great products. Right? I thought so anyway.

The Accusation and Why it is Absurd

Well, Chi apparently did not appreciate the positive attention, since they recently sent me an impersonal form letter demanding that I remove the review as trademark infringement. But here is the problem:

(1) It Is Not Trademark Infringement.

Trademark infringement is use of a mark in a way that could cause confusion over the ownership of the mark in commerce. Infringement occurs when the use of a trademark is likely to cause consumer confusion as to the source of the item or as to the sponsorship or approval of it. It is not meant to affect free speech. Thus, it excludes use for things such as editorial comments and news reporting. This common exception for news reporting and commentary has been extended by at least one court to bloggers. Outside of extraordinary circumstances, product reviews are not trademark infringement.  By their nature, there is normally nothing to cause consumer confusion. By necessity, the review has to use the product name to make editorial comments in reporting about the item. Indeed, cases involving negative reviews, which companies more understandably, albeit distastefully, have sought to shut down, have been held to not constitute trademark infringement. In my case, the material clearly stated that it was a reader review. It linked to Ulta, who I assume is an authorized retailer, to buy the product. There was nothing there to create consumer confusion. No reasonable reader would be unable to distinguish between myself as the blogger publishing a user’s review and Chi as the brand. Thus, there was no infringement. But further, the move was incredibly stupid (in my opinion). And that leads us to number two.

(2) It Is An Idiotic, Absurd, and Downright Bizarre Business Decision (in my opinion).

Why on earth would a company seek to suppress a positive, glowing review of their product? I am deluged daily with requests from companies to cover their products, and here is the kicker, that includes from Chi themselves! I am on the Chi  PR list. I have pitches in my inbox right now from the PR firm for Chi asking me to cover their products! So let me repeat something I wrote earlier. WTH?

In any event, regardless of the PR list, Why, why, why would a company search for positive mentions of their product on the internet and then seek to remove them? Why would they do this especially with bloggers? I am truly baffled.

To make this point even more clear, 61.1% reported that they utilize Facebook to read blogs. Chi has a Facebook page. At the time of this writing, it has just under 36,000 fans, a number that I find surprisingly small for a major brand, but that is beside the point.  I too have a Facebook page for my blog. At the time of this writing it has around 53,000 fans (our Twitter audiences are fairly similar in size with mine slightly smaller). Wouldn’t the prudent business decision for Chi be to seek bloggers such as myself, with greater Facebook reach, to endorse their products instead of angering them with baseless accusations? Had Chi written to me noting my post and seeking to strike up a partnership for more reviews I might have listened, they might have gotten some good press, people would buy products, and all would be happy. But they took the strange path of seeking to wipe good press off of the Internet.

Again, it seems to me like a bizarre PR decision, but I also suspect that PR and marketing were never asked. In the end, it is (in my opinion, remember), a downright terrible PR and marketing decision. In fact, I am curious to see what Chi’s PR people have to say about this. I feel a bit bad that I will be sending them this link for my coverage. It isn’t their fault and it happens to be a PR firm that I rather like. But given that Chi apparently finds blog coverage to be trademark infringement, I obviously can’t cover them, and it also is a bit baffling why they then have a PR company contracted to pitch to online publications at all.

I gave Chi a chance to change their mind and they did not reply (see the documentation page). So here we are. What do I do now? Well, I removed the supposedly offending article and a positive Biosilk review. They now redirect to this-something that is clearly an editorial commentary and clearly not endorsed by Chi or associated with Chi. There is no trademark infringement in using their name here. I wrote this because I am honestly angry. I view acts such as this as legal bullying, where companies go overboard tossing their weight around in misguided attempts to protect something, whether it be a misguided belief that they are protecting a mark or for some ulterior motive (again, I’m expressing my personal opinion here as I have been throughout). While I appreciate a company’s legitimate efforts to protect a mark, and I note that Chi has successfully cracked down on counterfeiting of their products, something that I applaud, I despise overreaching and won’t sit around taking it quietly. Or, perhaps this was just was very sloppy lawyering instead? I suspect that might be the case, but I really don’t know. Perhaps they confused me with a trademark bidder for paid ads or were just plain confused in general about what they were seeking to protect, although the nature of my blog as a product review and beauty news site is quite clear. Maybe they were just over ambitious about catching any use of their name they could find? Heck, maybe an employee just screwed up. Hard to say. Well, regardless, I despise sloppy practices too. Perhaps even more. How many other bloggers who legitimately covered Chi got this email? How many, unlike me, are not attorneys and were scared or or felt threatened by it? I find the potential for that irresponsible and repulsive.

If this had been a negative review I would have dug my heels in and left it up. Since it was positive, I’ll play along. The company wanted that glowing review removed, well they got it. Now they get negativity instead and they also get it broadcasted to my social media audience that has greater reach the their own. Be careful what you wish for right?

Ultimately, my opinion is that Chi’s marketing department really needs to talk to the legal department. I think their goals are grossly at odds with one another.

Anyway, If you got this far and are not yet bored to tears over stupid corporate legal antics (in my opinion, remember), do you want to know some awesome flat iron alternatives? here are two favorites of mine. I obviously won’t be recommending a Chi product ever again:

One final request. Please share this. I think it deserves to be heard. Thanks!

Documentation: I figured this was long enough. For those who want more, here  are screen cap copies of the letter I was sent, my reply, and the original review.