As soon as the Urban Decay Vice Palette came out, I knew that I wanted it. With 20 new shades, it is a must have for any Urban Decay eye shadow lover. My palette arrived yesterday, so here are photos, swatches, and a review with video.

The palette itself is a fairly substantial, attractive box. It isn’t exactly travel size. I consider it something that will stay in a  drawer for home use. 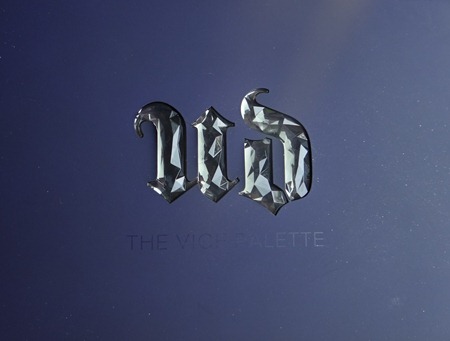 Inside are 20 new highly pigmented shades. The palette has a large mirror in the lid and a two-sided brush that is actually useable. One end is a small shader and the other is a blending brush.

The shades in the Vice Palette are, from left to right: 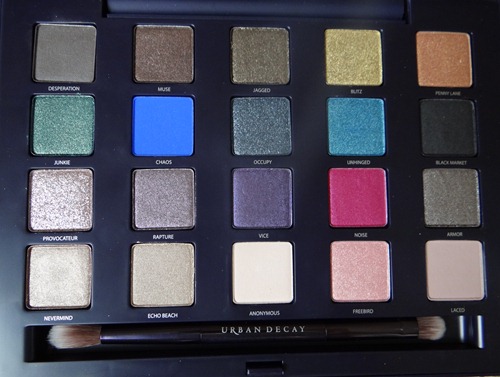 Below are swatches of the Urban Decay Vice Palette. The swatch order doesn’t perfectly match the order of the palette, so I labeled the shades.

In the top two rows: 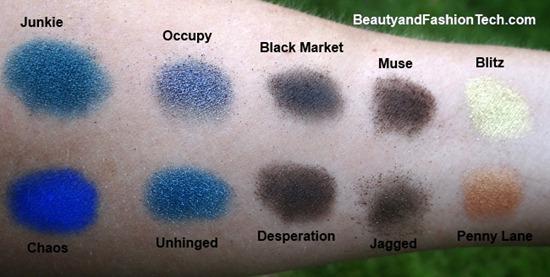 And swatches of the bottom to rows:

All of the shades have excellent pigment. A few of the glitter shades had high fallout for me, in particular, Freebird, Provocateur, and Jagged.  Plus to some extent, Rapture. I expect some fallout from glittery shades, but these were particularly high for me. Jagged did not swatch well without a primer, but that doesn’t surprise me. These really should be used with primer.

In the video, I note that Laced didn’t show up well. It does look OK in the photo, but I had to build it a bit to get it to show as well as it does. My favorite shade is Junkie. It has a beautiful mix of turquoise, blue and gold, and the photo does not do it justice. Penny Lane and Blitz are quite nice as well and Chaos is a wonderful vivid blue for fans of such shades.

Overall, this is a must have palette for any Urban Decay fan or collector. It is pretty hard to pass up on 20 new shades!  The Palette is $59 and should be available at least through the holidays.

Below is my video review of the Urban Decay Vice Palette: